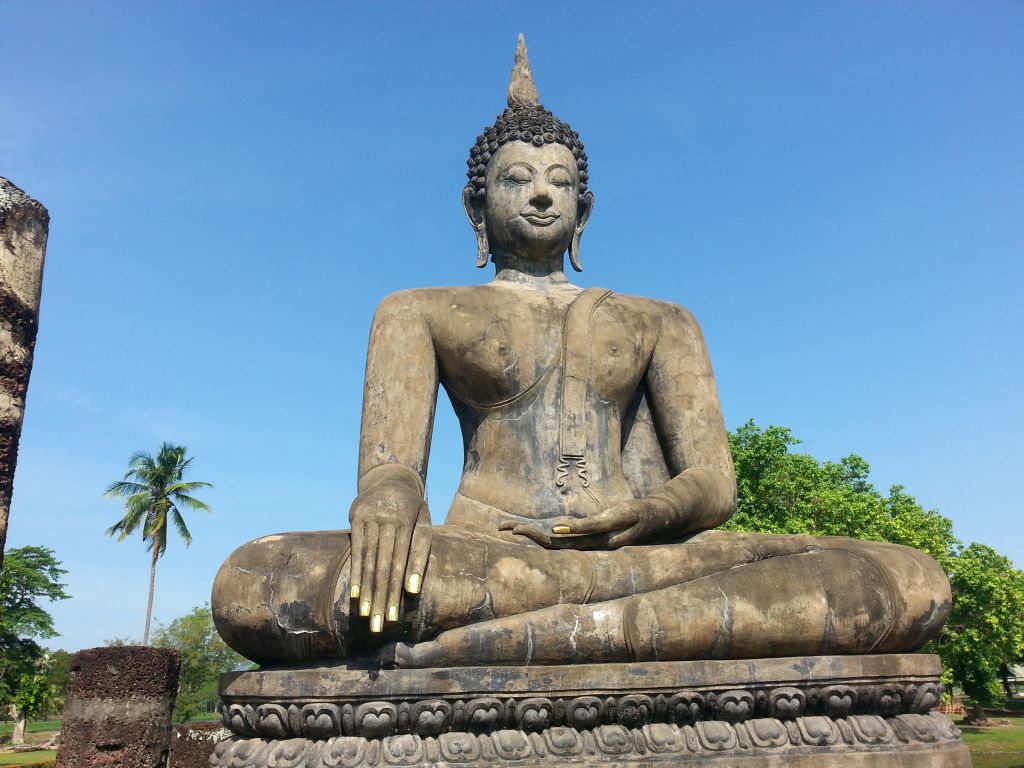 In the future Buddha will be a towering giant… After the Chinese, Buddhas must be the most numerous folk on the globe. With 360 million Buddhists worldwide, each having at least two or three statues of their founder, this amounts to about a billion copies of the same body.

Given such abundance it’s no surprise that Siddhartha Gautama appears in so many different forms. Emaciated or with folds of fat on the legs, tiny or the size of a three-storey building, he appears in all kinds of styles, from the finely crafted to the shockingly kitschy. Thailand is responsible for much of the proliferation of the world’s Buddha population. The multiplication of classical specimens there is something between a national industry and a mania.

It’s been going on since at least 16th or 17th Century, when lanes leading up to official buildings in Siamese cities were lined with Buddhas instead of trees. In some places, like Ayutthaya, many can still be seen today – though without their heads. The Ayutthaya Palace was demolished in 1767 after the Birma Army’s conquest.

In modern Thailand, Buddha can be seen everywhere – in large temples, in small courtyard shrines, on car instrument panels, behind the windows of 7-11 convenience stores, hanging from the necks of wealthy citizens and even decorating ice-cream carts.

Buddhist temples never limit themselves to a single Buddha effigy. Normally there is a large central statue whose base is covered in images of the Enlightened One in different attitudes. One reason for this is that Buddha has a special pose for each day of the week and even two for Wednesdays, one for the morning and another for the evening.

This distinction reflects Hindu beliefs related to the days of the week. Many Thais still refuse to cut anything on Wednesdays, break things on Thursdays or cremate the dead on Fridays.

The modernization of religion has only made matters more complex. For the past century, the eight poses of Buddha have been related to people’s birthdays. Nowadays you can visit a website where you can enter your date of birth. A calendar then calculates the day of the week you were born and finds the matching Buddha’s pose.

For those born on a Sunday, for example, the pose is Seven Days Looking, the one in which Siddhartha Gautamastood after attaining enlightenment. People born on a Monday are under the sign of Pacifying the Relatives and those born on a Tuesday are blessed by Realizing Nirvana. By the way, Wednesdays have two Buddha poses.

“Public” statues of Buddha are seldom small. One of the few exceptions to the rule that “bigger is better” is the Emerald Buddha, a 75-centimetre, or 2-5-ft, sculpture in Wat Phra Kaeo in the royal palacve. Despite its unremarkable appearance, it is one of the Thai people’s most sacred icons.

Wat Pho, Bangkok’s oldest temple, houses the biggest statue of Buddha – the Reclining Buddha – as well as the largest collection of images of the Awakened One in Thailand. Around a thousand of them.

Most temples effigies of Buddha are at least a man’s height but some reach monstrous dimensions, like the 46-metre, or 150-ft, Reclining Buddha in Wat Pho or the one made of five tons of solid gold in Wat Traimit in Bangkok.

But the Buddha of the Future is even more colossal. Judging from his footsteps as depicted in the temples – usually the size of a massage bathtub – he is definitely not a man you’d want to have a row with.

Sizes are typically more modest in the private sector. But it also offers a great variety of ugly Buddhas, ranging from large golden pendants and tiny figurines to bronze bas-reliefs standing on black velvet in glass frames. Thai people believe that the portlier the person is, the happier he is. Thus, fat Buddha’s name is the Happy Buddha.

Thai people believe that sticking a piece of gold foil on a Buddha statue brings good luck. Nevertheless, these days plastic has established itself as an essential material for the production of Buddhas.

When, in the 18th Century, King Taksin waged war on Laos for the diminutive Emerald Buddha, he can’t have imagined that one day his people would make Buddha’s image out of pink plastic. Such sculptures are easy to spot in front of the shop windows in the Banglampu area. Their bright, glossy bodies gleam from afar, often topped by red heads that oddly remind you of Ronald McDonald.

Other versions of multicolored Buddhas are the souvenirs made of transparent plastic that you can buy from any food shop. Sellers claim that their colors – amber, violet, green, navy blue, turquoise and purple – symbolize different precious stones and planets.

The Buddhas in public places bear more traditional colors. In most temples, they are golden in hue and have a bright sheen. This is due to the pieces of thin gold foil brought and stuck to them by thousands of worshippers. Thai people believe this brings good luck. It’s believed that Buddhism was introduced into Thailand as early as the 3rd Century BC.

If he could see the sea of Buddhas that present-day Thailand is, Siddhartha Gautama would be greatly surprised. It is said that he forbade his followers from making his image. He may have seen with this prophetic eyes how he would look in the future: bubbly, transparent, bright and made out of plastic.